Those of you who are regular readers of this blog know that my battle cry is to “Buy American Cars.” The US automobile manufacturers and all supporting industries need to put some skin in the game as well. What kind of example do the American Workers, who are also American Consumers, set when they drive to work and park their foreign vehicles in the lots of the very companies that provide them a standard of living?

Ford Motor Company has set a new policy at their new Dearborn Truck plant.
“Plant manager Rob Webber delivered a blunt message to workers at Ford Motor Co.’s Dearborn Truck factory this week: If you work at Ford, you better drive a Ford. Otherwise, park across the street and walk.” — Bryce G. Hoffman / The Detroit News

The meat of the message is to be a team player or suffer a compromise, as trivial as it may be. Jerry Sullivan, president of United Auto Workers Local 600, which represents some 2,600 workers at the plant, supports this new policy. “Everybody’s in this together. (We need) to buy the products we make and support the company,” states Mr. Sullivan. This is nothing new. The UAW has been known to post handbills on non-Ford vehicles in parking lots in the past. Foreign vehicles have been vandalized.

There are some negative repercussions to this kind of action, though. Disgruntled employees complaining that the company is telling them what to do in their private lives. In a town hall meeting to discuss this new policy, the place “erupted into applause.”

I agree with the company’s stance on this policy. Times have changed. The US auto industry is not what it used to be. It is time that we American’s start to change the way we use our purchasing power. No, it’s not being isolationist to have that attitude. Besides, tariffs are heavy for our products overseas. The new world economy isn’t exactly open and fair on both sides of the proverbial fence. There are still a lot of hurdles to overcome before our trade deficits start to decline. In the meantime, I close with my usual mantra…BUY AMERICAN! 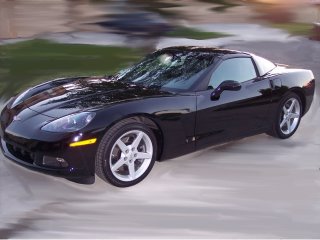 If you could think of one American built car that stood the test of time and was in a class all by itself, that would definitely be the Chevrolet Corvette. First appearing in 1953 as a unique entry into the sports car market dominated by European makes, it was not a muscle car by definition. The Corvette used muscle car powertrains and has represented American performance for over 50 years. The new C6, which designates the 6th generation design, is truly a 21st century Corvette. The all new Corvette is equipped with an all-new standard LS2 6.0 liter small block V8 that delivers 400 horses at 400 ft lbs of torque, major revisions to the automatic and manual transmissions, and a muscular exterior design that is 5 inches shorter and 1 inch narrower than its older sibling the C5. And finally, the exposed headlights return after being mechanically concealed since 1963.

My first exposure to the new C6 was exhilirating. It has a roomy cabin, low profile and a cool heads up display. The acceleration is awesome. Bringing the car up over 120 mph and cruising at that speed for several minutes, you really begin to understand the superior aerodynamics of this car. When you back off the accelerator pedal, and cruise at a legal speed with all the rest of the mortals, you feel cheated, almost as if you are standing still.

To steal a phrase from a past GM marketing campaign for the Oldsmobile line, which they offed in 2004, ‘This isn’t your Fathers’ Corvette. The aftermarket is looming large for the 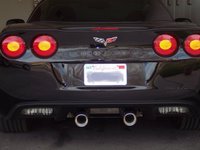 new ‘Vette. Performance, handling, and appearance packages are all available to personalize your ride. The example on the right is a new Flowmaster American Thunder exhaust system and custom exhaust tips that replace the pair of dual flutes for a more bold, muscle car appearance. It adds a few more horses and gives it a great sound. And yes, you can add some kick with simple enhancements under the hood. There are fuel injection performance kits from K&N that can increase the air flow to the air intake chamber and release even more horsepower that is so well hidden. The example on the left is a K&N FIPK on a 2005 C6 Corvette. As you can imagine, there are as many combinations of enhancements you can do to personalize your ride as your

imagination can come up with. That is the beauty of the American automotive experience. As usual, I am pleading my case to you. Go out and experience those great American cars!

It is both intriguing and frightening to see what is happening to the world’s industries. China is taking part in another industry hijacking.

China just took over the number two spot away from Japan in the auto manufacturing segment. Is this going to be a another wake up call to our car manufacturers? Remember when the Japanese product began pouring into the US in the late 70’s? That forced the Big Three to start looking at their quality issues. Fit and finish were at all time lows for US built cars. American drivers were demanding more fuel efficient, quality economical cars and the Japanese filled the need. The tide seems to be going that direction once again. Although, I believe we are doing a very good job on the quality issue. We just need to look at the fuel efficiency again. People are turning away from the big gas guzzling SUVs. What will the consuming public do when automobiles from China start pouring into the showroom floors and competing side-by-side? The market is very crowded with good quality products form all over the world. The only thing Chinese cars will have going for them will be price. The America companies that will be selling these cars will be the Wal-Mart of car dealerships. The Wal-Mart trend is starting to saturate and level off. American’s are starting to rethink their consuming ways. It isn’t very “Politically Correct” to buy cheap, low quality goods that are going to be disposed of in a short time and add to our already overflowing landfills. We are starting to keep our beloved cars longer. The American car consumer wants a good quality car or truck that is going to stay in their garage much longer than it did 20 years ago. Good value AND quality are the industry monikers now and far into the future. I shall step up onto my ‘Made in the USA’ soapbox again and shout….WAKE UP AMERICA! Make a concerted effort to buy American made goods. ‘Made in the USA’ means jobs, a thriving economy and a future for our children and grandchildren. 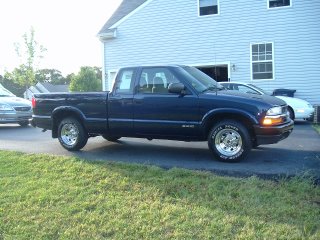 Just thought I would add a picture of my most favorite vehicle. Yes its American! And, yes its a Chevy! Its a work in progress. I am in the process of adding a nice air-flow system and new exhaust. I am looking for suggestions. I just joined the S10 Forum today. I highly recommend you go out and get yourself a car that you can play with and have a heckuva lot of fun. There are a lot of bargains out there. Now go shopping. And, oh yes, make sure its made in the USA!

Saving Our American Auto Industry One Generation At A Time

The biggest challenge facing our indigenous automobile manufacturers is creating new customers out of the youngest generation. The Baby Boomers really got the car bug bad growing up in 50’s on through the 70’s. As we got older, our appetites for foreign cars grew. Gen Xer’s really got the foreign car bug to the point that during the 90’s it really put the hurts to the US industry. Gen Yer’s are all fired up about modifying their Honda’s, Toyota’s, etc which by the way helps the aftermarket industry. There is nothing wrong with the Asian cars, the make a very good product. But, by swaying my kids to take a look at the American car scene, I hope to do my part in reviving it. Chrysler really started firing things up a few years ago when they built the PT Cruiser. It helped put the spotlight back on to American ingenuity. Next came the retro styled Ford Mustang. Wow, what a beautiful automobile. And Ford is doing it right by leaving the design wide open to the aftermarket. Chrysler came out with the Charger, Chevrolet with the SSR and a lot more to come. I was reading an article in the latest edition of Motor Trend where Chrysler built a concept Dodge Challenger. Everything old is new again. The designs immediately appeal to us Baby Boomers. I am seeing the younger generations starting to salivate at the chance to get their hands on them too! Did you catch a look at the concept Camaro? The pony car wars are heating up again. People are starting to get all giddy about the Big 3 products once more. It’s a great time to be alive and motoring in the good old USA once again. Write to you Congressman and tell them to vote for a new national holiday. Let’s call it American Car Revolution Day. The day we regain dominance in the Auto Industry.

Lloyd signing out….now go down to your local GM, Ford or Chrysler dealers and show your kids what real cars are.